The Origin of Fort Detrick 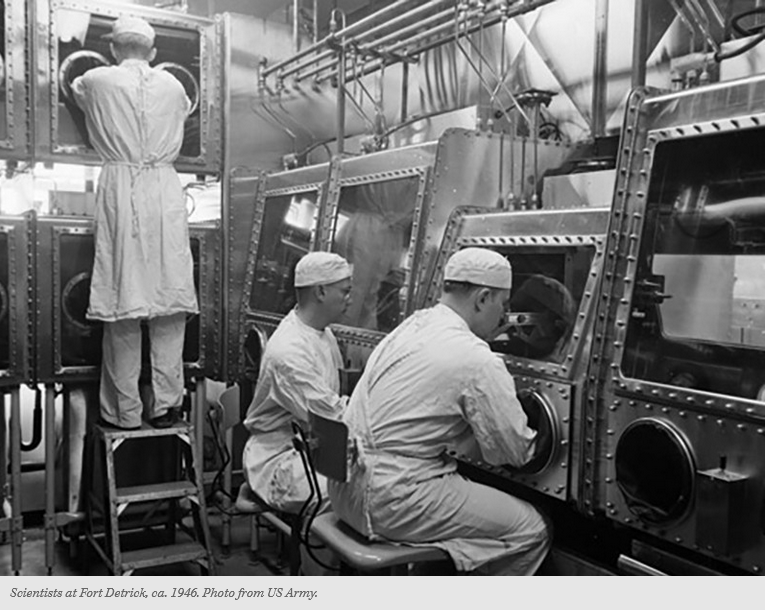 By 1969 the stories leaking out about the US's secret bio-weapons program were growing evermore alarming.  Nixon/Kissinger ordered a review, but they already knew what they'd find: huge stockpiles of disease-bombs, wild STAGE 3 TRIAL experiments on humans to test the effectiveness of vaccines against live bio-weapon candidates (!), etc. etc ... But most disturbingly, the quiet accumulation of humanity-shaping power - under-cover of a deep-state bureaucratic secret society.

If you're packing that - you're packing serious clout in the MOU round-table discussions ... the ones that decide: what's the best reality experience for the masses?

So how did it get to that crazy mother-fucking-level of secret scio-kingdoms fabricating the future of the world?

Naturally, it all started organically, in the early forties.   In  WW2 as we saw - when the world went berserk - anything that took your fancy as a disease with potential, was justified, in a crisis, as a research-target, for the common-good ...

In those sliding-doors' days, there were great entrepreneurs who saw opportunity ...  in this case ... George W. .... Merck.   Yes, Merck, the murky-pharmaceutical-giant Merck.   George W's trick, which turned the company into what it is today, was:  employ a clique of civilian scientist brainiacs on retainers from academia.

Sounds simple - it is - as was Wellcome Trust's founder's invention of putting powder medicine into pills (until Wayne Carey reversed the process in 2022) - the trick is:  be the first to do it.   George W. created an overlapping subset space between Big Universities & Private Enterprise that gave rise to the pharmaceutical oligarchies that went onto rule the world.  Nice work if you can get it.

Merck's original crew were top-notch experts, selected for their skills as much as their willingness to operate below the surface.  All hush-hush.  All men obviously.  Ahead of the curve thinkers, the best-of-the-best bio-warfare enthusiasts. Your mission, if you choose to accept:  Develop bio-weapons superiority on earth.

Even Roosevelt had no idea they existed initially.   But when he did, he was all in - formalized a military partnership - now we're cooking: capitalism - academia - military -  a menage a trois - operating beneath a veil of unaccountable secrecy, a thick-one, more like a blanket.  Their love-child:  Camp Detrick ...  Which grew into a Fort.   The premier germ-war facility on the planet.

That gives you an insight into the Empire Culture - now a mega-zillion-$ industry - shaping our lives as we speak ...

Revisions
Export
Back to top