On the back of 911 - less than two weeks later in fact -  the Anthrax terrorist attack happened. Letters laced with the deadly pathogen were addressed to prominent politicians and press representatives - they stated: 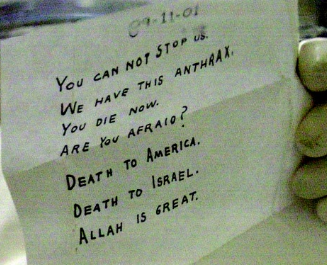 All all-caps. This created a helluva fuss not surprisingly - great stuff if yer the media - which was at fever pitch - breathlessly reporting on scientists talking up Al Qaeda in crop dusters - powdering New York City with anthrax - killing hundreds of thousands.

The Vice-President’s advice: Never waste a crisis. Devise em if you have to. We’ve got the media feeding em Islamophobia multiplied by bio-terror. It’s a no-brainer. Launch a payback invasion of Iraq while the tide is full - give 'em the good ol' foil evil spiel - whatever - meanwhile liberating the oilfields.

And so it came to pass. An invasion to dismantle Saddam Hussein’s - non-existent - bio-weapons of mass destruction program - whilst insisting it was all to keep us safe - but hey - Cheney and the gravy-trainers made a killing - God willing - let freedom reign.

Julian Assange's tried uncovering it - earned ‘im a life of One-Everything security up his arse - now behind bars. A rare hero in this - i’m thinkin - it’s in his upbringing - at Gool-man-gar Primary - next door to Nimbin

Meanwhile back at the ranch, smashing the axis of evil involved soldiers vaxxed-to-the max with the latest in experimental anthrax-jabs. Now known as Gulf War illness.

Which gets me to this:

Amidst the commotion  there was another - lesser known - explosion:

in science-funding - to fight bioterrorism.

A mushrooming of BSL labs at dual-purpose bio-weapons/defense facilities - or - universities - at your expense. On the edge of science and global security - secret projects meddling with deadly bugs to predict the next moves of our devious - extremist - enemies - the full might of one-science riding to our rescue - so exciting - then designing, delivering drugs, surveillance tech - to protect us.

Export
Back to top